Although the album is now inevitably etched into the history of rock music, Santana’s self-titled debut album (sometimes referred to as “Santana by Santana”) was the result of a fluid process of timing and coordination of events and people; not coincidentally, a reflection of Carlos Santana’s process in creating his music.

Formed in the mid ’60s, the band was originally called “The Santana Blues Band,” later shortened it to “Blues Band,” and finally landed on the more euphonic “Santana.” The group’s repertoire consisted mostly of extended improvisational pieces, thoroughly grounded in the blues of B.B. King that had inspired Carlos.

Watch the Video
Like many bands, they changed members regularly. Carlos and keyboardist/vocalist Gregg Rolie were the only ones in it from the beginning. (Conguero Michael Carabello was in the band for a while, then returned later.)

Santana debuted at San Francisco’s legendary Fillmore in June of 1968, where they played a 4-night stint. The band so impressed promoter Bill Graham that he booked them regularly after that; they routinely packed the place. Besides appearing at the Fillmore and other venues, Santana received a fair amount of exposure on the San Francisco bay area radio stations, who were starting to play the band’s demos.

Columbia Records president Clive Davis signed Santana in late 1968, and the band went into the studio in January, 1969. At that time, in addition to Carlos Santana and Gregg Rolie, the lineup consisted of Doc Livingston on drums, Dave Brown on bass, and Marcus Malone on congas. However, not satisfied with the initial results, the band realized they needed to make some changes.

Livingston was replaced by young drumming phenom Michael Shrieve, who, even at 16, already had a background in both jazz and rock. Marcus Malone, who left the band due to personal issues, was replaced with the returning conguero Michael Carabello. 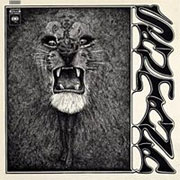 Artist Lee Conklin was quite familiar with Santana’s music, “both from performances and their demos, which received extensive airplay on FM radio in San Francisco,” he recalls. As Conklin had already done a number of promotional concert posters for Bill Graham, it was no surprise when Graham asked him to do one for a show that Santana was headlining.He continues, “with a little inspiration from a Muse named MaryJane, I remembered seeing a picture of a lion in a book of animal pictures I had, and used that image as the basis of my drawing.”

Conklin doesn’t explain what inspired him to work in all the faces to the drawing, but suffice it to say that it added to the mystique of the album to sit around trying to find them while listening to the songs!

Go To: Sound of Santana