Latin rock legend Carlos Santana has always been one to combine his musical gifts with talented artists around him. More recently, starting with the multi-platinum Supernatural, Carlos has taken to working with hot, young singers, players, songwriters and producers in a number of styles, from hip-hop to hard rock, and various other genres.

Watch the Video
Here are just a few examples.

Santana first joined forces with the Nickelback singer on 2002’s album, Shaman. Originally written and sung by Kroeger, the song “Why Don’t You and I” was nixed by the record label for marketing reasons. However, Alex Band of The Calling stepped in and re-sang the track, which also appears on Ultimate Santana, released 2008.

After his vocals were removed from the 2002 hit “Why Don’t You and I,” Kroeger penned “Into The Night” for Santana, and this time nothing stood in his way! The song is on the Ultimate Santana album, along with his buddy Alex Band’s version of “Why Don’t You and I.”

This iconic rapper/songwriter (aka Erik Schrody) must have tickled Santana’s spiritual bone with his deep lyrics about themes like religion and self-realization. Their 1999 collaboration on “Put Your Lights On,” which was on Supernatural, was combination of Everlast’s poignant words and Carlos’ guitar work.

On Supernatural, the ex-Fugees diva creates a blend of rapping and vocals — in conjunction with singer/songwriter Cee-Lo for “Do You Like The Way.” This bluesy hip-hop number gives an edge to the album.

For many years, Mana has been one of the most popular in the Latin market. Let be singer/songwriter Fher Oliver, Mana sat down with Santana to co-write “Corazon Espinado,” a song with Spanish lyrics, that echoes the pop sensibility of “Smooth.”

Pop singer and hit songwriter Michelle Branch had success on her own, and in The Wreckers, her country music duo with Jessica Harp, before hooking up with Carlos for the pop smash “The Game of Love.” A straight ahead pop ditty, the song dominated the airwaves, as well as propelling the sales of Shaman, the album on which it debuted. The pair followed it up with a similar cut, “I’m Feeling You,” on 2005’s All That I Am.

The Matchbox 20 singer certainly hit the jackpot when he co-wrote and sang “Smooth,” arguably the most successful song from 1999’s phenomenal album, Supernatural. With it’s signature minor guitar riffs, Latin percussion and memorable vocals, Smooth came out of the gate running and kept on going.

Since Aerosmith re-invented themselves in the ’80s, it’s appropriate that lead singer Steven Tyler would join forces with Carlos for the 2005 rock song “Just Feel Better,” from Santana’s All That I Am album.

Although they didn’t write the song, The Product DMB did the rapping and singing on Supernatural’s second hit: “Maria Maria.” The song has become such a barrio anthem that it was tapped when Santana was looking for a title for his chain of restaurants! 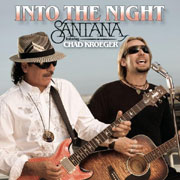 Beginning with the ground-breaking album Supernatural, orchestrated in great part by record label legend Clive Davis, Santana has staged a phenomenal career revival since this millennium. Of the many collaborations in which he has participated, two of the most successful are with Rob Thomas (Matchbox 20) and Chad Kroeger (Nickelback). Both singer/singer-writers have written and sung multiple songs with Carlos, to the benefit of all.