Since the celebrated rebirth of his career beginning with 1999’s smash hit Supernatural, Carlos Santana has become a world icon. His fame reaches beyond his albums, his guitar playing, or even his image, and has taken on a life of its own.

In addition , Carlos Santana released his own brand of sparkling wine: Santana DVX.

Working in collaboration with the experts at Mumm Winery in Napa Valley, California, Carlos and his then-wife Deborah Santana, created the vintage. (Note: although the sparkling wine is made in the “champenoise style” like french champagne, no beverage made outside of Champagne, France, can legally be called “Champagne.”)

Long-time connoisseurs of wine as well as habitues of the Napa valley wineries, Carlos and Deborah were approached by representatives from Mumm winery. Working with winemaker Ludovic Dervin, the Santanas tasted a number of sparkling wines over a period of several weeks. Fortuitously, all three chose the same vintage, and Santana DVX Sparkling Wine was created.

Comprised of half Pinot Noir and half Chardonnay, Santana DVX wine is made exclusively from Napa Valley grapes, and aged in French oak barrels. It is reported to have “beautiful floral aromas, a mild nutty bouquet and a creamy palate with a long finish.” Only about 1,600 cases of the wine were produced, and sold at fine wine dealers around the country. Suggested retail price was $55, with a dollar from every bottle going to the Santanas’ charity, the Milagro Foundation. 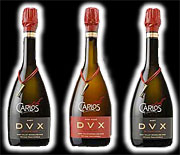 As of this date, Santana DVX Sparkling Wine is no longer available through retail outlets, and there have been no announcements regarding issuing another pressing.

Such is the legend of the Santana name that his wine sparked the creation of a tribute (or spoof, depending on your viewpoint) song called “Santana DVX,” by the rap group/comedy troupe The Lonely Island. Though the song pokes fun at the product, it still serves to mark the iconic status of the Latin rock guitarist. Not surprisingly, it was quite a viral hit across the social media.