Nickelback, a rock band out of Canada, has become that country’s third most successful act, in terms of album sales. The group has clocked more than 25 million units sold worldwide, and shows no signs of slowing down. In truth, much of the band’s appeal is due to the vocal and writing chops of Chad Kroeger, lead singer / guitarist for the band.

Combining the powerful grunge tone with a decent range, Kroeger’s voice is a perfect fit for the times — and his lyrics. Covering subjects like failed relationships, alcoholism, life as a rock musician on the road, and growing up with a rough childhood, Chad Kroeger has touched a nerve in listeners across numerous genres.

Watch the Video
In addition, Kroeger, like many other successful singers who write their own songs, understands his voice well enough to write melodies that get the maximum use out of its potential.

Although born Chad Robert Turton, he later adopted the surname of his half brother, Mike Kroeger (bassist for Nickelback). Chad, Mike, and guitarist/vocalist Ryan Peake have known each other since their grade school days. When Mike headed off to play rock and roll, Chad and Ryan followed him, and Nickelback was born. (The name came from a line Mike Kroeger said many times a day while working at Starbucks: “Here’s your ‘nickel back.'”)

Nickelback’s early success was due, in great part, to the band’s self-motivated marketing. In fact, they managed to sell 10,000 copies of their third album, The State, in Canada. Pretty impressive, considering that they handled all the management, booking, promotion and distribution chores themselves.

Always driven, Chad Kroeger, besides being the lead vocalist and primary songwriter for Nickelback, also started his own label, 604 Records, with Nickelback’s long-time attorney, Jonathan Simkin. The label roster currently includes Theory of a Deadman, Armchair Cynics, and Marianas Trench, The Organ, Faber Drive and Thornley, among other artists.

Kroeger has also been active as a successful collaborator. In 2002, he co-wrote and performed the song “Hero” for that year’s blockbuster, Spider-Man. The same year Chad also wrote and sang “Why Don’t You & I,” with Santana, for the album Shaman. Through a legal twist — Nickelback’s label thought Kroeger’s voice on the song would overshadow the band’s upcoming album — Chad Kroeger’s vocal track was replaced by singer Alex Band, from The Calling. (Not only did Kroeger support it, but he actually suggested Alex!).

Five years later, Santana again called on Kroeger to co-write and sing “Into the Night,” for Santana’s 2007 album Ultimate Santana. That song reached #2 on Billboard’s Adult Top 40 chart, as well as garnering a Top 10 position in more than nine additional charts. 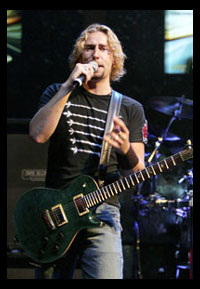 Hero
Why Don’t You & I
Into the Night