Following the success of his three “revival” albums (Supernatural, Shaman, and All That I Am), Carlos Santana released the career-spanning CD Ultimate Santana. This album includes cuts from the first two of the aforementioned albums, in addition to his most popular songs from the last four decades. 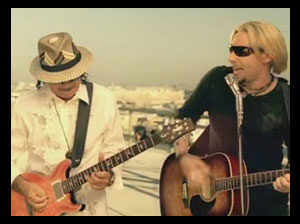 “Into the Night,” the first single from the album, is a collaboration between Santana and Chad Kroeger, singer from Nickelback. A throwback to the flavor of “Smooth” from Supernatural, Into the Night returns Carlos to his beloved Dorian mode with it’s trademark four chord progression: i – III – VII – IV (Am – C – G – D).

Watch the Video
Unlike some of the other hits from his latest albums, Into the Night feels more like a classic Santana song, complete with prominent Latin percussion (both congas and timbales). Not surprising, since the song was co-written by Chad and Carlos. In addition, Santana’s guitar forms an integral part of the melody, with repeating hooks throughout.

Into the Night’s video has Carlos Santana and Chad Kroeger playing on a rooftop, while Freddy Rodriguez (Ugly Betty) abandons his thoughts of suicide after he sees a girl dancing in a neighboring apartment.

Although the song’s pedestrian lyrics don’t quite live up to the clever wordplay in the earlier “Smooth,” Santana’s guitar work and Kroeger’s vocal tone blend well, and the Latin percussion gives the modern-sounding song an added kick. All in all, it’s clear why Into the Night has become a hit.

Into the Night Lyrics

Like a gift from the heavens, it was easy to tell

It was love from above, that could save me from hell
She had fire in her soul; it was easy to see
How the devil himself could be pulled out of me
There were drums in the air as she started to dance
Every soul in the room keeping time with their hands
And we sang

Like a piece to the puzzle that falls into place
You could tell how we felt from the look on our faces
She was spinning in circles with the moon in our eyes
No room left to move in between you and I
We forgot where we were, and we lost track of time
And we sang to the wind as we danced through the night
And we sang

Into the Night Chords