When Carlos Santana and Clive Davis put together Santana’s comeback album, Supernatural, they wisely recruited a number of young artists with vastly different styles: Lauryn Hill (from the Fugees), Dave Matthews, Rob Thomas (of Matchbox 20), and Everlast, to name a few.

Though Supernatural achieved its greatest commercial success with the Rob Thomas collaboration, “Smooth,” it was followed closely by the radio hit, “Maria Maria,” a three-chord, Latin-influenced hip-hop song. 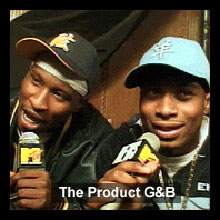 Maria Maria was co-written and produced by Wyclef Jean and Jerry “Wonder” Duplessis. Duplessis was the bass player for the Fugees, and, besides a distinguished songwriting career, is enjoying success with film soundtracks. Wyclef Jean, a rapper/singer/producer who was one of the main members of the Fugees trio, is Duplessis’ cousin. It was Jean’s discovery, hip-hop duo, The Product G&B, that provide vocals on Maria Maria.

Quite a departure for Santana, Maria Maria marries a hip-beat with soulful singing, rapping, and two vastly different guitar sounds from Carlos Santana: nylon-string acoustic guitar during the verses and choruses, and raunchy electric throughout the post-choruses.

The arrangement is sparse, the drum track repetitive, and the guitar in the post-choruses is so sloppy as to reek almost of amateurism. The key word here is “almost.” In the hands of a lesser production team, Maria Maria could easily have been a royal mess. Instead, it’s a charming song with an infectious quality.

First, is Carlos’ acoustic work during the verses and choruses, which is clean and lyrical. It contrasts nicely with the gravel of the electric in the post-choruses. The one time — during the bridge — that Carlos opens up is enough to put his inimitable stamp on the cut.

get the details
And, the vocals are well-sung and arranged. Maria Maria’s deft weaving of rap with traditional R&B vocal styles plays perfectly against the sparse arrangement and Carlos’ guitar work.

Finally, the lyrics themselves are gritty yet poignant, and make good use of both English and Spanish to get across a very current and important message, as well as set the mood.