Though most people identify the song “Black Magic Woman” with Santana, it was actually written in the late ’60s by Fleetwood Mac guitarist Peter Green. And, in fact, it become a hit in Britain for Fleetwood Mac before Santana ever recorded it. 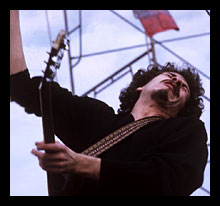 The original version, however, is substantially different from Santana’s iconic recording (the first and most memorable version appeared on Abraxas in 1970). Fleetwood Mac’s Black Magic Woman is a simple guitar/bass/drum instrumental track with a vocal overlaid. Although there are hints of the melodic guitar riffs that Carlos later made famous, most listeners would barely recognize the song.

One of the most critical differences in the Santana Black Magic Woman, however, is the combination of that original Peter Green song with “Gypsy Queen,” by Gabor Szabo. Gabor was an innovative guitarist who combined elements of jazz, pop-rock, and his native Hungarian music. In Santana’s Black Magic Woman, Szabo’s Gypsy Queen actually bookends the song — inspiring the opening riffs, and providing the framework for the jam at the end.

Technically, the full name of the song on Santana’s albums is: Black Magic Woman/Gypsy Queen.

Watch the Video
Besides the integration of Gypsy Queen, Santana’s Black Magic Woman differs from the original in numerous ways. First, is the addition of keyboards. Gregg Rolie uses electric piano and Hammond B3 organ to fatten the rhythm section, as well as contributing several standout riffs of his own. Second is the addition of percussion, with not only the usual timbales and congas, but also guiro and bongos in the mix.

Carlos, of course, takes some of the thematic elements hinted at by Peter Green and fleshes them out into memorable hooks. The subtle shadings of his Gibson SG guitar swing from soft clean tones to more raunchy sounds, including some that degenerate into feedback. He also makes good use of his volume control to, like a violinist, add drama by altering the volume and tone during held notes.

Both timbalero Jose Chepito Areas and conguero Mike Carabello are even more active than usual on Black Magic Woman. Areas, in particular, has a chance to open up and show some impressive chops during the end of the Gypsy Queen jam.

All in all, Black Magic Woman/Gypsy Queen showcases some of the best features of the original Santana lineup, and remains, to this day, one of Santana’s most popular songs.
[do_widget id=cta_post_widget-6
Black Magic Woman Video