Back at the beginning of the ’70s, before Santana became a worldwide brand name, he was simply a somewhat shy, albeit talented, guitarist who led a group of the same name. Though the band had released their first album and garnered international notice with their appearance at Woodstock (and subsequent clip in the film, Woodstock), Carlos himself was still fairly diffident. In fact rumor has it that he used to stand far back on the stage, nestled in the protective bosom of the rhythm section. (Most guitar players are such hams you can’t keep them from the front of the stage.)

Watch the Video
Early versions of the band had featured a second guitar player (Tim Frazer, for example), so the concept was not unfamiliar. Plus, the spirit of the jam session was the environment in which the band thrived. Thus, when Carlos met an impressive young guitar player named Neal Schon, it was understandable that he invite Schon to sit in with the band.

A natural guitarist is born 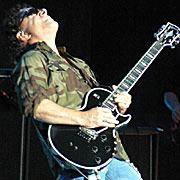 Born just 15 years before he and Santana met, Neal Schon had lived in a number of places prior to settling in the San Francisco bay area (both parents were in the military). His father, Matthew, a jazz saxophonist and big band arranger, started Neal on the saxophone at a very early age. Later, young Schon transitioned to the oboe because he thought it sounded cooler.

Besides schooling him in more traditional forms of music, Neal’s father introduced him to The Beatles, whose songs he considered well-written. He then bought Neal a guitar; that was the turning point.

At 10 years old, Neal showed a dedication to practicing that few kids his age could match. In addition, he was blessed with a natural ear that enabled him to copy guitar parts off records by Cream, Jimi Hendrix, B.B. King, and other artists.

(Schon is a skilled harmony singer, and although he doesn’t usually sing lead, you can hear him on the opening to “People and Places” by Journey, as well as cuts like “No More Lies” with Jan Hammer. While he’s never concentrated on developing his chops as a lead singer, his pitch is impeccable.)

While Schon was jamming in the studio with Santana, Eric Clapton walked in — and liked what he heard. He asked Neal to jam with him in an adjacent studio, then invited him up on stage at a show. This led to an offer to join Derek and the Dominos on tour, but when Carlos heard about it, he countered with his own proposal: for Schon to join Santana.