Although many bands, TV shows, products, and other successful icons can appear to be “overnight successes,” they rarely are. Usually, that success is preceded by years of hard work, trial and error, and a drive for perfection. Mesa Boogie amplifiers are no exception.

Watch the Video
To comprehend why the Mesa Boogie amp was such an incredible success, it is necessary to understand the reason that the distorted guitar sound gained acceptance. Although Jimi Hendrix was certainly integral in developing and popularizing distortion, he by no means invented the phenomenon. Nor was he the only one to utilize it.

Actually, distortion as a function of guitar sounds was originally simply a by-product of guitar players driving under-powered amplifiers to the edge (by turning them up all the way), in order to be heard! The first guitar amplifiers were either based on radio circuits, or were actually radio units. They did not provide very much power, and were certainly not designed to be driven to their limits. Such use resulted in a “clipped,” or distorted signal.

Watch the Video
Those distorted signals appeared in thousands of live shows — and more importantly — on hundreds of albums. Musicians are great imitators, and when young guitar players heard those distorted tones, they wanted to recreate them. Thus, a sound was born.

Fender Ushers In A New Era

In the ’50s and ’60s, Fender was the most successful amplifier company. However, though they built more powerful amps than had previously been available — which guitar players appreciated — they did not build-in a great amount of distortion. True, you could get some distortion by cranking the amp up, but it was limited. And, you had to play incredibly loudly!

Additionally, guitar players were becoming aware of a shortcoming of the guitar, as opposed to the saxophone. Namely, that you couldn’t sustain the notes as long as you wanted. You were limited by the natural decay of the instrument. (See The Sustain Problem Sidebar.) 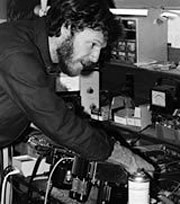 “There just wasn’t enough gain in the standard Fender circuits. Everyone had that complaint, especially Santana. Even with his jacked-up Princeton, he couldn’t get enough sustain. That’s what he was always craving: more sustain; that ability to hold a note as long as he wanted without it dying out. Some nights, some notes would hang, but not enough to get what he wanted. Incremental increases in amplifier gain (which is the number of times an amplifier multiplies the weak guitar signal) would help, but it couldn’t deliver big, fat tone with predictable sustain.” — Randall Smith