To get back to Jimi Hendrix: when you listen to his recordings, there is a tremendous amount of distortion, and a lot of feedback (which is a way of sustaining certain notes), but not the smooth, richly toned, sustained notes that have become common in the last four decades.

Note: Other guitar players, including Carlos Santana, were using similar tricks to get sustain, including holding the guitar in front of the amp to achieve feedback, and adding reverb and echo to lengthen the notes. Check the opening to the Beatles’ “I Feel Fine” for what many feel to be the earliest popular recording of feedback.

Back in the ’60s, a young technician named Randall Smith started a music store in the San Francisco bay area called Prune Music. As local musicians discovered that he could “mod” amps (modify them to affect the sound), he began to make a name for himself. His client list included Steve Miller, the Grateful Dead, Jefferson Airplane, Quicksilver, and other popular bands.

It is not reasonable to assume that Smith woke up one day and thought, “Gee, I should invent a high-gain amplifier to give guitarists the sustain and tone they crave!” What is more plausible is that over time, given his contacts with guitar players and his work on their amps, he developed an understanding of the situation.

Eventually, Randall Smith decided to pull a “joke” on one of his clients: Barry Melton, guitarist for Country Joe and the Fish. Smith tore apart and re-built Melton’s Fender Princeton (a small amp capable of generating 12 watts of power), beefing up the power circuitry and replacing the speaker (See Development of the Boogie Sidebar.) Just as he was walking the amp out to the front of the store to test it, he ran into Carlos Santana. After playing with the amp for quite a while, legend has it that Santana exclaimed, “Shit man. That little thing really Boogies!”

Development of the Boogie 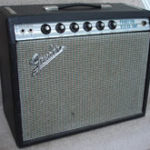 In an interview, Randall Smith says about Mesa Boogie and Santana that the amp “came together just in time for his great Abraxas album, which introduced the sound of high-gain to the world.” Actually, Carlos was probably using a modified Fender Princeton for that album. Although the amp had been worked on by Smith, it wasn’t the full Mesa BoogieMark I model.