Even while “resting,” however, Rolie was not idle. He released two albums as a solo artist: the self-titled Gregg Rolie, and later, Gringo. The records, a slightly more pedestrian version of Journey’s sound, weren’t successful commercially, although Eddie Money later scored a hit with a re-make of “I Wanna Go Back.”

Riding The Storm Out 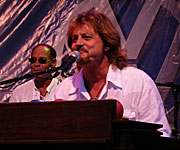 Teaming back up with fellow ex-Journey members Ross Vallory and Steve Smith (who had replaced Aynsley Dunbar on drums after Infinity), Gregg formed The Storm; the band was signed to Interscope Records in 1990. While the first album spawned two hits (“I’ve Got a Lot to Learn About Love” and “Show Me The Way”), the second album was never even released — a victim of the complete shake-up of the music industry due to the “Seattle invasion” led by Nirvana.

The Storm, featuring Kevin Chalfant, a lead similar with a sound similar to Steve Perry, had mirrored the pop-sound of both Journey and Rolie’s solo albums. In 1994, however, Gregg decided to return to his “roots” with the creation of Abraxas Pool. Latin sound, slight return Consisting of fellow Santana band-mates Michael Shrieve, [conguero] Michael Carabello, and [timbalero] Jose “Chepito” Areas, along with long-time musical partner Neal Schon, and bassist Alphonso Johnson, Abraxas Pool captures not only the original musician lineup, but also some of the Latin percussion-fueled sound of early Santana.

Watch the Video
Once again, Rolie’s resonant vocal tones and fat organ sounds came to the forefront in the band’s only album, the self-titled Abraxas Pool. While filled with hooks (the simple power of “Baila Mi Cha Cha” is a perfect example), the album did not sell well. It did, however, serve as a launching pad for Rolie’s re-emergence as a solo artist.

For the past 10 years, Rolie’s band has been touring, and has, in addition, produced the appropriately named album Roots, literally a return to the blues-infused Latin sound of Rolie’s tenure with the early Santana.

get the details
Much to the delight of audiences around the world, the band plays, besides their own material, a string of the early Santana hits in the creation of which Rolie played an integral part.