In 1969, the band Santana not only wasn’t widely known, they hadn’t even released their first album, Santana. Though they had signed a deal with CBS Records, they were still in production at the time the Woodstock Festival was being booked. 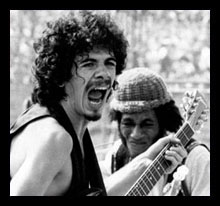 However, Santana had a powerful ally in Bill Graham, a San Franciscan promoter (and, at one time, considered the top music promoter in the world), manager, and well known personality in the music business. Graham convinced the people assembling the acts for Woodstock to include Santana on the roster. Luckily it worked out well for everyone concerned.

Watch the Video
So, Santana was scheduled to go on stage at the Woodstock Festival, one of the biggest concerts the world had ever seen.

Early on Saturday, August 16th, 1969, as the band knew they had many hours to go before their set, some of the band members, including Carlos himself, decided to drop acid. (It must be remembered that during that stage of the ’60s, such an act might be considered akin to taking an aspirin or having a lite beer.)

The story continues, the band was then informed that, it was “go on now,” or “don’t go on at all.” Quite a quandary! It’s a testament to their musical ability that they not only played, but in fact tore up the stage!

Watch the Video
Their set consisted of seven songs:

All the songs except Fried Neckbones made the original cut on Santana’s self-titled debut album (Fried Neckbones appears on later, extended versions of the record), but it was Soul Sacrifice that the public remembers. This was due in no small part to its appearance in the film.

Watch the Video
Santana’s first album was released in October of 1969; approximately five months later, the movie, Woodstock, was released. The film certainly played an integral part in introducing Santana to a broad audience, and helped catapult the album to a number 4 chart position.