It must have been obvious from the beginning that this group had potential as a headlining act, because the “backing band” concept was soon dropped, and the next year they signed a deal with Columbia Records under their new name, Journey.

While everyone in the band was a standout musician, it was the duo of Rolie and Schon that led the group’s sound. The eponymous release, Journey, was a masterpiece; to this day, it hold its own as a classic record. 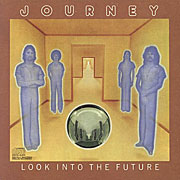 Though George Tickner quickly left the band, the remaining four members recorded three records, including the debut, Look Into The Future, and Next. And, while Journey reached cult status among musicians and progressive music lovers, they hadn’t achieved commercial success. Thus, the record label pushed the band to add a frontman, and steer their sound toward a more obviously mainstream vibe.

get the details
Lead singer Robert Fleischman was hired, but that lasted only 9 months, and didn’t include any new albums. (Fleischman later gained notoriety as lead singer for heavy metal axeman Vinnie Vincent.) In 1977, Steve Perry joined the band, and ushered in a new era for Journey.

Listed in the annals of rock as one of the world’s most popular bands, Journey has sold, to date, more than 80 million albums worldwide. Not only that, but their incredible musicianship also made them one of the most polished live bands anywhere.

As Journey’s main lead singer and chief songwriter (he wrote or co-wrote nearly every song on the first three albums), Rolie could have become defensive at the introduction of a lead singer. Instead, in true collaborative fashion, he simply used his formidable keyboard and arrangement chops to support the partnership of Schon and Perry, as well as continuing to be a force, both vocally and as a co-writer, within the new format.

Journey’s 2nd three albums, Infinity, Evolution, and Departure, catapulted the band to pop-rock super-stardom, and encompassed grueling, months-long tours. By 1980, Rolie had had enough. He quit the band, and helped fill his spot by bringing in ex-Babies keyboard player Jonathan Cain.