Obviously, this guitar is not exactly like the Santana Signature model. The top carve is much simpler, the headstock shape is the regular PRS shape (not the Santana shape), and the fretboard has only 22 frets, not 24. Moreover, the bird inlay fretboard markers are pearloid plastic instead of abalone.

Watch the Video
In my eyes, however, it is definitely similar enough to do the high-end model justice. Thus, it will allow a whole new group of players access to the power of a Santana-esque guitar.

Plugging In, and Turning Up 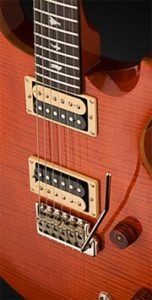 With the guitar in tip-top shape acoustically, I brought it back to my rehearsal studio to plug it into my rig: a Fender Hot-Rod DeVille amp (4×10 model), and a TC Electronic M-One (with minimal digital reverb set).

Throughout the neck, the tone was rich, smooth, and even. Especially at the top end of the high E string (frets 19 through 22). Other guitars I’ve played tend to lose juice up there; not the PRS SE Santana, which stayed strong all the way. Also, the bottom end is clean and punchy — even the open low E string had good clarity.

get the details
To tell the truth, I don’t know how such a small, light guitar can sound so fat! But my spine is certainly thankful for that fact.

Now came the moment of truth: I ran through the Santana songs that I’d play with this guitar. Since I play them note-for-note, including all solos, I knew that it was the best way to compare this guitar’s tone with his. (Within reasonable limits, of course, since I use a different amp and in later years his sound is processed in the studio.)

After this exercise, there was no doubt: PRS’s new SE Santana model does an excellent job of capturing Carlos’ world-renowned tone. Certainly it got my tone even closer than it had been. What’s more, after adjusting my technique (I had been using another guitar for this purpose for 8 years), I was able to achieve the famous Santana ever-lasting sustain without the feedback problems with which I had been plagued in the past.

Next: PRS SE Guitar: Beyond Santana